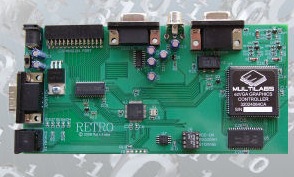 Get in the computer time machine and travel back to the days of a simple computer that’s programmed in BASIC and boots in under 1 second. Or, you can buy the Retro Computer System.

Many readers of this site will have had at least a bit of experience with the personal computers of yore, such as the Commodore 64, Apple II, Atari, or any number of other similar systems. The machines from that era were simple by today’s standards but they had a certain charm and there was certainly a level of variety in the computer ‘ecosystem’ that made the various models vastly different from each other (for you young’uns who’ve only ever used Windows, there was a time in the ancient computer past where programs would not run on every machine you could buy!)

All of those early computers had several things in common. You’d turn them on and almost instantly, you were at a prompt ready to begin writing a program or doing whatever else you wanted. There was almost always a BASIC programming language that formed the base of the user interface. There was often an “expansion port” where you could hook-up either home-brew circuits or store bought goodies. It was very different from today.

Well, if you want to re-live those glory days of the simple computer, Multilabs has you covered with their new Retro Computer System. It’s a simple 8-bit system that boots straight into a BASIC language prompt, just like the old C64. There are numerous ports such as a PS2 keyboard port, DB9 digital joystick port for use with Atari style sticks, and of course an expansion port. Video is output via an ezVGA chip, so you can use the Retro with a regular VGA monitor rather than tracking-down an ancient composite monitor which most of us don’t have any longer.

The BASIC language used on the Retro will look familiar to anyone who’s used any of the computers I mentioned above. It even uses line numbering! Here’s a sample from the sample Eliza-esque demo:

Multilabs sells a blank PCB that plugs into the expansion port and allows you to interface relays, sensors, and anything else to use with the Retro. Since there isn’t an over-complicated gigabyte-sized operating system getting in the way, you can address your expansion port hardware directly without any drivers, so you can really get down to business working on your projects!

The Multilabs Retro Computer System is $100 which is relatively cheap for the functionality you get. If you don’t have any PS2 keyboards, don’t forget to order one (I think I dumped all my old keyboards just over a year ago – it figures!) I may put a Retro in my ever-growing to-buy list but if Multilabs wants to send an eval unit, that’s cool too 🙂 . I certainly miss the simplicity of my C64 and being able to trivially write programs and just have fun with a computer. If you have any experience with the Retro, please leave a comment below!