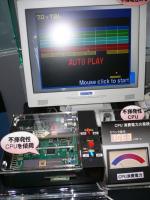 I can’t say that I’ve ever considered the idea of a non-volatile CPU, but this interesting concept has several obvious benefits.

One of the current trends in electronics is increasing power efficiency. We’ve ramped speeds up to the point where sometimes, it’s OK to trade-off speed in the interest of lower power consumption. But what if you could have both?

Rohm has demonstrated a nonvolatile 8-bit CPU at the CEATEC Japan show. This CPU uses ferroelectric registers to allow the power to be completely removed from the chip without losing the CPU state. Thus, the processor can be completely shut-off while waiting for user input, for example, which would result in massive decreases in power consumption. Also, according to Rohm, the nonvolatile registers do not slow the circuit down nor do they add much in the way of extra die size.

Using a chip like this would allow your computer to shut down completely and then instantly switch back on, right where you left it. Of course, moving from an 8-bit demonstration CPU to something as complex as a desktop CPU is probably asking too much, but I’ll bet that you see this nonvolatile technology applied to small embedded processors used in PDAs, toys, cell phones, and any other small device that can benefit from enhanced battery life.

Check-out the (small) article on the Rohm nonvolatile CPU demonstration. If anyone has more “beefy” information on this technology, please post it in the comments below as I’d love to read more about it.