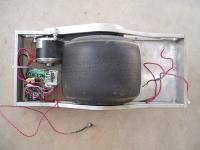 You might think this is something out of the Segway R&D department, but it’s just a project of a creative hobbyist who combined an Arduino controller, a motor, and some knowledge to create a fun result.

Since the introduction of the Segway, the concept of a self-balancing motorized transport vehicle has been on the radar of hobbyists everywhere. As much as we’d all like a Segway, they’re expensive enough that it’s often worth trying to create your own design — and it can be fun and educational too.

One such project goes one better — or is it one less? — than a Segway. it is a single-wheeled design that is somewhat reminiscent of a skateboard. You stand with one foot on either side of the wheel and the microcontroller control system helps balance you so that neither end of the “board” is dragging on the ground when you ride it.

Here’s a video showing the self-balancing Arduino-controlled skateboard in use:

You can head to the Chris Coleman’s site and get the code for the Arduino along with more details on the motor controller and other stuff that he used. There are links to plenty of other similar projects as well. It looks like a fairly affordable, small, and feasible project for the home hobbyist — just be sure to wear plenty of protective gear while you’re debugging your microcontroller code! 😀