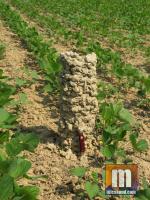 I’ve have to say that I never gave the living conditions of a crawdad (or crawfish?) home much thought, but when I received these photos, I figured I’m not the only one who’d find them interesting or curious.

Crawdads, or crawfish I guess, are basically like tiny lobsters according to my childhood memories. Any time I’ve found them, it was in the water at the lake or somewhere like that.

That’s why these photos, which were taken in a soybean field in Indiana, were so interesting.

Apparently, the crawdads build these little “castles” in fields out there. I guess that there’s enough water for them to stay moist underground from the irrigation of the crops. So, they must dig a little underground hole and push the mud blobs up to the surface, thus forming the tower-shaped, unusual looking castle. I’ve been told that the towers are usually three to four inches tall.

That gets us to interesting point #2: these are much bigger. The short one was probably six inches or so high, so it’s twice the typical size. 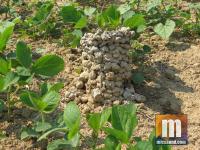 There was one crawdad mud castle that really towered above the rest, though. It was over 14 inches tall. The knife shown in the photo is 3.75″ long, so you can judge just how tall the tower is. If you ask me, that crawdad is making tons of extra work for himself pushing the mud blobs up that high! 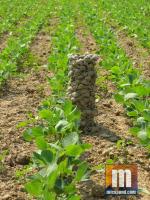 A quote from the person who took the photos:

They push mud up from the hole in which they live, presumably to enlarge their quarters? This is the only place I have seen these structures in all the places we have lived. I have been told that crawdads build these, but that is taken on faith. I have never seen a crawdad in a hole. However, if you drop a rock into the mouth of one of these holes, you will hear clicking, which presumably are the claws of the crawdad clicking as it warns whoever is above not to come down the hole. 🙂

Anyway, there’s your “odd nature stuff” tidbit for the day! How many of you even knew that crawdads built such things or lived in soybean fields? 😉