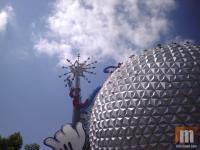 These photos of the Epcot wand and Spaceship Earth were taken yesterday, 7/13/07. As you can see they’re moving pretty quickly to pull the letters off the wand. I’d imagine that the larger wand itself may be a bit more work.
I made a few-hour stop by Epcot on Friday the 13th (oooh scary!) and as I was driving to park, I noticed that the bulk of the “Epcot” lettering has already been taken-down. I also grabbed a pic of the walls around the ride entrance.

I’m not a purist, but I agree with many that the wand just didn’t look “right” on Spaceship Earth, so I’m glad they’re removing it.

The day was nice and not real crowded (as shown in one photo). However, just after lunch, Test Track went-down and didn’t come back up before I left at about 3:00. I don’t know if it’s the result, but it did seem that the park got more crowded after TT was down. I know that without Test Track or Spaceship Earth, I was doing lots of walking around with everyone else.

The photos were taken on my phone, as I didn’t feel like hauling my normal camera around for the short day, so the quality isn’t the greatest, but I think they’re OK. 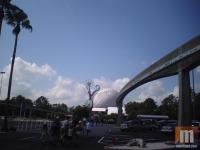 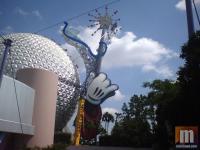 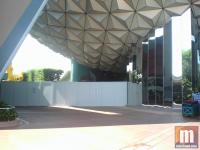 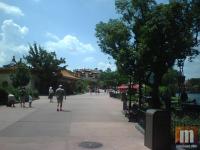