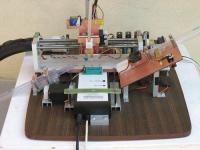 I’m a sucker for cool electro-mechanical projects (if you have one you’d like me to post about, use the Contact link) so when I saw this, I got excited. A guy in Hungary has created a “robot” which utilizes an old printer mechanism with a few standard radio-control servos to program microcontrollers in bulk.

The printer slide is used to provide the horizontal movement while a special mechanism moves a vacuum attachment vertically to grab the chips from the supply rail on the right. The blank microcontroller is dropped into a ZIF socket and a servo closes the latch. After the programming is complete, the arm removed the chip from the socket and transfers it to the output rail.

I’ve spent a quite few years in the semiconductor manufacturing field, including several in the production areas and I can say that this guy’s project is actually remarkably similar to what’s used by the professionals — just much slower. I’ll bet that he could ramp the horizontal movement significantly but other than that, it’s a pretty sweet project!

Check the video out below. The first half shows the overall process and the second half shows each step in detail.

For more info, check the site of the automated robotic microcontroller programmer.

[Thanks to Hacked Gadgets, one of my favorite DIY sites!] 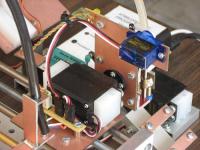