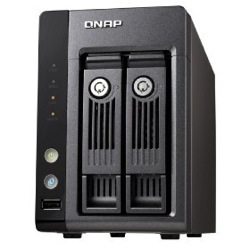 I finally decided to bite the bullet and bought a real NAS for use at home. I decided on the QNAP TS-219P for a number of reasons I’ll discuss in the post. Also, I have plenty of screenshots showing the QNAP UI and a couple simple benchmarks comparing the performance to a USB disk attached to an Airport Extreme.

When it comes to a home server, I’ve usually gone the “cheap” route. That means building my own server from old PC parts, setting up my own OS, and maintaining it myself. I’ve had good luck with this and certainly learned a ton about FreeBSD, Linux, and other stuff doing this.

But, the problem is that those old PCs take up space, make noise, and eat electricity.

One day, I decided that I was tired of paying the electric bills and having that big mid-tower server sitting around in my way. After all, for a home “server” I just need network storage to dump files on for the most part. Sure, it’s nice to have an SSH server or the occasional thing like that, but not critical compared to the storage component.

That’s why I’ve been using a Guardian MAXimus hardware RAID 1 USB disk attached to my Apple Airport Extreme (AEX) router. The Guardian Max gave me the mirrored RAID I wanted for my network storage since the AEX doesn’t do anything with RAID at all.

Since I had the router turned-on all the time, attaching a disk to it for network use seemed like a good solution. I could ditch that huge PC and just have the AEX “airdisk”.

This worked fine for about a year, and then I got fed-up with the slow Time Machine backups and the fact that the AEX router spins the disks down after some ridiculously short period of time like five minutes. Every time I tried to access the disk, I had to wait for them to spin up and become available. Then, once they were up, the performance was, uhh, shall we say “lackluster” at about 3-5 MB/sec.

One day, I stumbled across the QNAP line of dedicated NAS (Network Attached Storage) appliances. These were exactly what I wanted. Small, very low power, handled RAID, and could even do stuff like run SSH servers, websites, and other stuff. And, the key thing: they were reasonably priced (note I said “reasonably” not “cheap”).

So, after much research and basically finding only good reviews of the QNAP series, I opted for the $400 TS-219P. This toaster-sized box features two hot-swappable bays and an ARM processor. The OS is Linux under the hood, but the appealing thing after adminning my own boxes was NOT having to admin this one! It is basically a plug-and-chug storage appliance.

Today, after upgrading to the QNAP, my Time Machine syncs are super snappy, I can set the disk spin-down time, and my direct SMB transfers are in the neighborhood of 25-32 MB/sec. Much better! The QNAP works with my Mac, Windows and Linux machines for storage, plus it provides an SSH tunnel server for private surfing on the road. I can also use it to share files with family members using a web interface rather than FTP or something like that. I generally don’t even log into the admin interface for weeks at a time — because the QNAP just sits there, day in and day out, doing its thing exactly as I want it to. It gives me no hassles – I get enough of those from my day job!

Anyway, I wanted to provide some screenshots showing the UI as well as a couple simple benchmarks using Xbench.

First, here is the old benchmark using the Airport Extreme router with the disk attached. Note that the hardware RAID1 enclosure was not the limiting factor in any way: 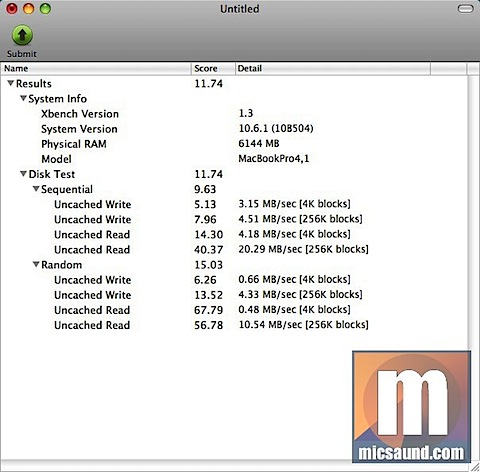 Now, here is the new and improved benchmark using the QNAP on the same network/etc.: 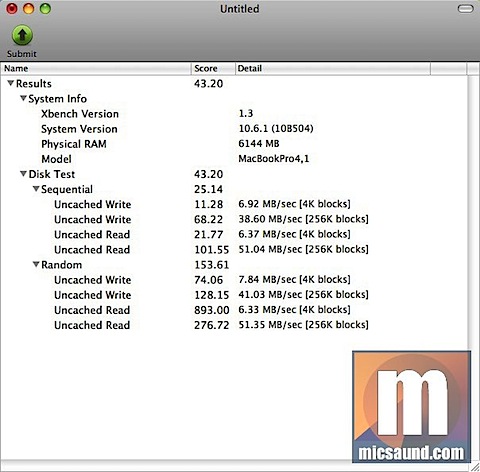 Here’s a random screenshot I took to show how the QNAP appears in Winbloze since the rest of my screenshots are taken from OS X: 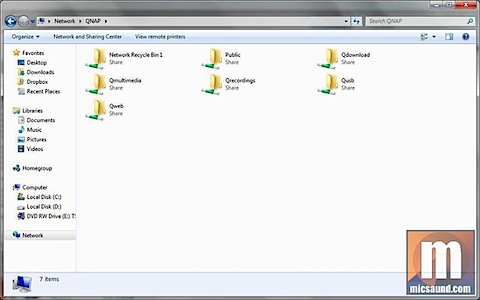 QNAP includes a program called the QFinder which locates the NAS when first run and allows you to configure it even if you don’t know the IP address/etc.

Next up, we see the pics of the actual QNAP administration UI. I went through every menu so that you can see what the various options are. I forgot the System Administration menu, so that’s last. I was too excited setting-up my new toy and taking all the screenshots was getting tiresome. Note the nerd goodliness of iSCSI, remote syslog, etc.

Well, I hope that all this work answers a question someone has or helps them decide whether a QNAP NAS is the right choice or not. If you buy one (or not), I’d appreciate your using the link to Amazon below as a means to say “thanks for all the screenshots”! 😀

P.S. this is my first post written with Ecto. I had to do some stuff manually in WP that I couldn’t figure-out in Ecto. Let me know if you have any trouble.