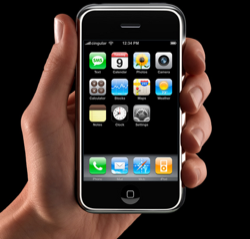 After having the awesome DLO Folio leather case on my iPod Touch, I wanted something similar for the iPhone 3G I just got this week. Unfortunately, finding flip-style cases for the 3G isn’t that easy yet since the products are all pretty new. I decided to take a gamble on the PDO Flipp and here’s my quick review.

Yeah, yeah – I can hear you long-time readers pointing-out that I bashed all the hype on the original iPhone a year ago, but now I bought one (albeit the 3G update)? Yep, I did and so far I love it. But this isn’t a review about the iPhone 3G.

It seems that many of the iPhone cases are a design that leaves the screen wide-open, for example, those rubber backing type cases that go for about $15-30. That’s great for the back of the phone, but if I’m throwing it into my pocket which may have some coins or other items in it, I’d prefer a bit of protection for the screen as well.

The other most common type of case covers the back and screen, but these usually use an ugly plastic window that, well, frankly looks like crap when it get partially stuck to the screen. One of the primary great things about the iPhone is the nice, bright, high-res screen, after all.

So, I was on a mission to find a decent “folio-style” case. The DLO HipCase Folio is what I’ve been using on my iPod Touch since I bought it and it’s an awesome case. It’s sturdy, fits well, protects the precious Touch inside, and looks good to boot. If you have an iPod Touch, I highly recommend this case.

The iPhone is a bit thicker than the Touch, though, so it can’t use the same case. Oh, I tried, but it’s just about 1/8″ too thick to comfortably slide into that DLO case.

Searching for iPod cases that have the flipping screen cover and magnetic “latch” wasn’t too easy. There just aren’t that many of them out there to choose from yet. A friend at work sent me the link to the PDO Flipp iPhone 3G case and since they were running a special for free shipping and I found a coupon code for 10% off, I decided to try it out.

Construction:
The Flipp is made from a nice, soft leather much like the DLO case. It’s slightly padded and feels good in your hand. It has a subtle leather “texture” on it, which looks nice unlike one of the other cases (which is sold in the Apple Stores) that has a hideous shiny alligator-skin pattern embossed on it – yuck! The interior is lined with a black velour type “fuzz” which will not scratch the iPhone. The edges and seams are stitched nicely and don’t have any hanging threads or any other visible quality issues.

It features a belt clip that is strong and appears to be well attached. The clip rotates, so you can orient your phone to point whatever direction you prefer. The cover is held-shut by two strong embedded magnets, one on each side of the iPhone’s button.

Various cut-outs on the Flipp case allow you to connect to the headphone jack, dock connector, push the volume buttons on the side, and let the speakers in the iPhone play.

Fit:
Unlike some cases which I’ve read reviews of where the iPhone sits loosely inside, the Flipp’s fit on the phone is slightly snug. That will keep it from accidentally sliding-out, which is something my old DLO case wasn’t perfect at.

The cut-outs for the speakers and dock connector align well. The volume button cut-outs are just barely large enough. Actually, even with my phone pressed all the way down into the case, the top 1/16″ or so of the volume “up” is covered with the thin leather. This doesn’t appear that it will be a problem, but it may have been better for PDO to make one single cut-out for the volume and ringer-mute switch than to try to make them separate.

The camera cut-out is one thing that doesn’t align very well. Because the case is leather and there are slight variances in the shape/etc., my iPhone sits just a tad off-center which places the camera lens out of alignment with the matching hole in the case. It’s a simple matter to push the iPhone over slightly when you take a photo, but for those who snap lots of photos using their phone, it might be annoying. More on this below.

The magnets that hold the flip shut are strong and I don’t anticipate any issues with unexpected openings. Closing the flap gives a satisfying muted “snap” as the magnets pull it shut.

Use:
I like that I can connect the dock connector without removing the iPhone from the case. The headphone jack is readily accessible and other than the minor issues I described above regarding the alignment of the volume and camera holes, the case is quite nice. It definitely makes the iPhone 3G chunkier, but you have to expect that when you’re enclosing it in padded leather.

The flap/folio design is great in my opinion because it provides protection for the screen, but it moves completely out of the way when you want to see and touch that big, beautiful screen. It’s the best of both worlds for me. Someone who takes pics with the built-in camera, though may not like the folio design as the flap folds over and will cover the lens unless you hold it up with your hand. For me, I’ll probably just pull the iPhone out of the case when I need to take a photo, but if you’re like a teenage girl who takes photos of everything every minute of the day, the folio design won’t be for you.

Because of the added thickness when the iPhone is in the case, you very likely won’t be able to put it into any kind of dock without removing the phone. I have a set of Logitech speakers which I don’t have a dock adapter in, hence making the opening very large, but with the belt clip, I still can’t put the iPhone into the speakers while it’s in the PDO Flipp case. Adding any kind of case will probably affect many docks, so that’s just common sense, but I figured it was worth noting anyway.

Conclusion:
The PDO Flipp is a nice folio-style case for the iPhone 3G. It is well constructed and will offer good protection for the iPhone without looking silly like some of those bright pink rubber cases. The screen is easily accessible and you can actually touch the screen, which I think is better than the cases with a permanent plastic window. The Flipp comes with a free screen protector also, which is a nice bonus, although I haven’t tried it yet and I’m not sure that I will need it.

Overall, I think this case is a good purchase for someone wanting a nice leather folio-type case for the iPhone 3G. It’s well-made, nice to look at, and very reasonably priced at $30 in a field of extremely over-priced iPhone 3G accessories. I’m personally happy with it and think it’s one of the better options for this style of case at this time.

Amazon is offering the PDO Flipp case for $24 right now, which is an even better deal than I got. And, here is the manufacturer’s page for the PDO Flipp iPhone 3G case.

Here are some photos I took. Sorry for the “1 per line” format – I don’t know how to get this stupid WordPress caption thing to not do that (if you know, please leave a comment!)