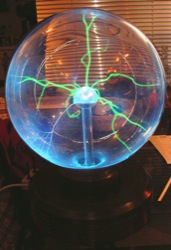 Remember those plasma/lightning globes, primarily from the late 1980’s and early 90’s? They were “the thing” back then, but I can’t say that I ever thought about hacking one to see what could be changed. Fortunately, someone else has!

Surely you have seen a plasma globe: they are the glass spheres of varying sizes that have colored electrical arcs dancing around in them. You can touch the globe to affect the movement of the lightning. Yeah, you remember 😉

The standard mode of operation for a plasma globe is either “on” or “pulse to audio” which is supposed to result in some kind of music-synchronized disco effect (which honestly, never worked that great in my experience). 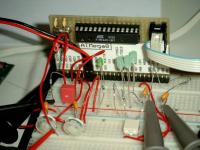 Well, it appears that you can alter the frequency of the power supply feeding the high voltage into the globe to create various effects. Combine that with a microcontroller, and you can have a flexible, easily modified programmable plasma globe which you can experiment with and zone-out to when the mood strikes you.

In the video below, the color of the lightning can be changed from green at low frequencies to purple at high frequencies. The movement and behavior of the electricity changes with the frequencies as well. Using an ATmega8 microcontroller, the guy created a system that can be programmed and adjusted via a computer interface, but will also download the programs and settings to the microcontroller allowing un-tethered operation. Pretty cool!

Just make sure that you’re careful around the high voltage supply so you don’t zap yourself! 😀

2 thoughts on “Who knew plasma globes could be hacked?”