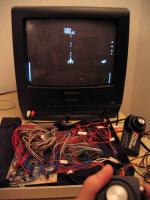 Using a trio of PIC microcontrollers, this guy built a fully functional video game which uses analog paddles and has more gameplay than the usual Pong type stuff you typically see from PIC games.

People have been making very simple pong type games using Microchip PIC microcontrollers for some time. However, due to the very limited power of the PIC, you typically don’t see anything involving sound, moving backgrounds, more advanced gameplay, or animation.

John Sachs Beeckler decided to take PIC-based gaming to the next level, though. His design uses three PICs to sub-divide the tasks required for making a full-featured game. There is one master processor (16F877) which controls the overall system and performs the game logic, while two additional PICs (16F84 and 16F877) handle the graphics and sound generation.

The main code was written in C but the graphics generator is hand-coded in assembly to meet the strict requirements of generating the video signal (remember programming the Atari 2600?) The sound data is pulled from an external EEPROM and converted to the analog audio signal using a resistor network. The entire codebase fits in 8K of FLASH and efficiently uses the minimal ROM and RAM available on the PIC microcontrollers.

The code and design has been open-sourced, so you can download everything and use it in your own projects or to just build your own identical game if you want. One thing I’d suggest changing about the design is how he wired everything up — what a mess! 😉 Check-out the Alien Slaughter home built PIC game system for more details.