Anybody who’s played the classic vector video games from the 1980’s knows that you need a real vector monitor to display them authentically. The vector monitor draws smooth lines from point to point with the elctron beam rather than assembling stair-stepped lines like a conventional raster monitor. 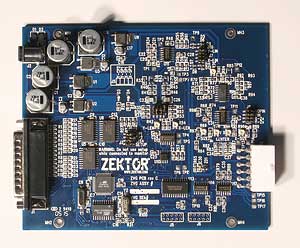 So, while you could play Tempest or Star Castle on emulators like MAME, the results just weren’t the same without the bright, crisp lines of the vector monitor.

Well, prepare to emulate authentically! A company called Zektor has created an analog vector generator board that can be connected to a computer and allows the display of vector games on a real vector monitor. The board connects via a parallel port to the computer and then drives an old vector screen (or o-scope) which you provide.

Finding the vector monitor might be somewhat of a challenge since nobody has made them in over 20 years, and when you do find one, it’ll probably not be cheap. Therefore, the Zektor board has a number of safeguards in-place to protect your valuable monitor from being overdriven and damaging it permanently.

Obviously, very few people will just have an open-frame arcade monitor sitting next to their PC to play VectorMAME on (if you do, I hope you understand the potentially dangerous voltages involved!) so this AVG board is more for someone building a vector MAME cabinet with a dedicated computer. So, with two MAME cabinets, you could emulate pretty much any arcade video game ever made and do it correctly! That’s pretty cool…