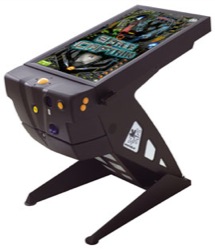 An Austrian company called TAB is taking another stab at building a better digital pinball machine. This time, they have created a very unique, modern look for the cabinet that says “I’m not your normal pinball machine!” and I think that’ll help get people to try it.

The TAB Virtual Pinball Machine features tilt sensors and vibration feedback, to help recreate an exciting pinball experience. It uses a 42″ plasma screen to display any one of six included games. Additional games can be downloaded to the game’s internal hard drive, and you can link the machine for competitions thanks to built-in networking support.

Hopefully, I’ll run across one of these TAB digital pinball machines at some point and can try it out. Let me know if you’ve every tried one – I’m curious how well it works!